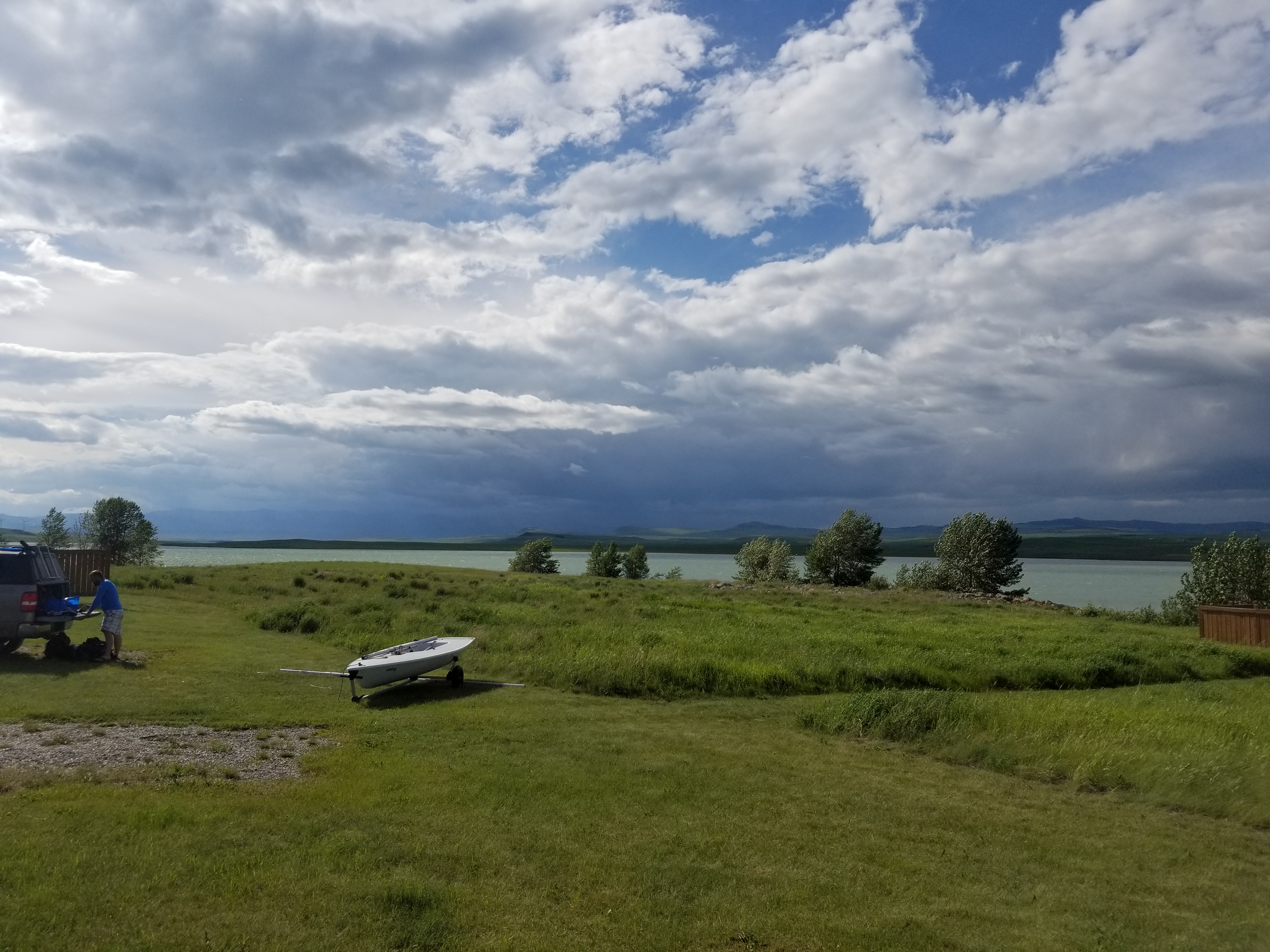 On June 22, 2019, nine Laser sailors met at Windy Point on the Oldman Reservoir in southwestern Alberta, Canada. They were there to compete in the Oldman Dam Laser Marathon, a 24 km out-and-back sail in alpine-clear water set amongst rolling prairie and forests of wind turbines. After a random draw of beach positions, sailors lined up for the Le Mans start on a crescent-shaped beach. The rule was that feet must not leave ground prior to the countdown reaching zero. This led to styles ranging from scootering to deep-water dancing, to the seal-side-deck slide. There was light wind at the start, and then a strengthening to a 12-17 knot westerly that required hard hiking and plenty of powering/depowering to sustain speed. Sunshine switched to showers as the fleet approached the 12-km finish of race 1. A strong westerly during lunch break promised for an easy and exciting run in race 2, but then a blind-siding 180-degree shift hit in the final seconds of countdown. This created confusion, as sailors had staged at their sterns for a running start. A 15 knot nor-easter settled in after this confounding change, and that required a “working” close reach on port tack for the next hour. It was an impressive Laser parade until a final reshuffling by shifty winds in the finish bay.

These variable conditions made for challenging racing. “Magical Mike” Hooper performed some tricky maneuvers to be clear ahead at both horns. Congratulations Mike for a second annual Oldman Dam Marathon championship! “Breezy Barry” Tee was “ahead of U” most of the time with smooth sailing and canny wind-finding abilities, giving him second overall. “Rickie Ricardo” Quinlan was pounding waves on the Race 1 up-wind but showed some shifty sailing strategy in Race 2, raising him to 3rd overall. “Big Jim” Campbell sailed strongly in the big air portions of the races, but slipped back a little in weakening winds, placing a close 4th overall. In 5th place Liam “The Kid” Quinlan (youngest entrant) and “Big Wind Bill” Mulloy ended up locked in a tie. They both worked hard and had one good race each, but then slipped back in the other race. 7th placing was owned by our mentor and Legend “Wavey Davey” Elliott, who demonstrated his fine hiking skills and good boat speed. “Gritty Glynis” Dorey consistently worked her way through gusts and lulls to stay with the fleet and place 8th, also receiving recognition as the best female sailor. “Tireless Trevor” Gom owned 9th, but did so in a respectable manner, finishing within striking distance of the group – a big improvement on his past performance.

Oldman Reservoir has a reputation for strong winds, as was shown last year with 30 knot+ winds. The 2019 conditions were nowhere near that, but conditions still provided for a challenging marathon sail that all could handle. As a no-club-host regatta there are logistic challenges, but our supporters rose to the occasion. Stacey and Phil of the Alberta Sailing Association had pledged support and ASA delivered. Coaches Lauri Kalkkinen and Eugene Dombrowski teamed up to provide us with strong on-water support, logistic assistance, and coaching advice. We also had Dale and Barb Jamieson accompanied by Tina King on-water to watch over us. Our mobile “lunch truck” was provided by “Gentleman John” Cormack. He circled the wagons to give us a warm comfortable microclimate where we enjoyed a hot lunch of soup, croissants, fruit and cookies, all prepared by “Doctor Dee” Kennedy, with serving assistance by Linda Tee. This great feed at half time powered up sailors for race 2.

“Gentleman John” led the starts, summarized results, and led the awards ceremony. Participants and volunteers received a white “Oldman Dam Marathon” hat. Winners were given mugs donated by the Oldman River Brewery, and there was a random draw for gift certificates donated by Glenmore Boats. A big thanks to our supporters! Sailors convened at the taproom of the Oldman River Brewery where Eugene provided some personalized coaching tips, and sailors regaled each other with their stories of the day. The event wrapped up with an evening meal and campout at Quinlan’s Lee Lake cabin.

Seen something cool going on in the Alberta sailing community recently? Have an idea for a blog post or article? We would love  to hear about it! Drop us a line at office@albertasailing.com