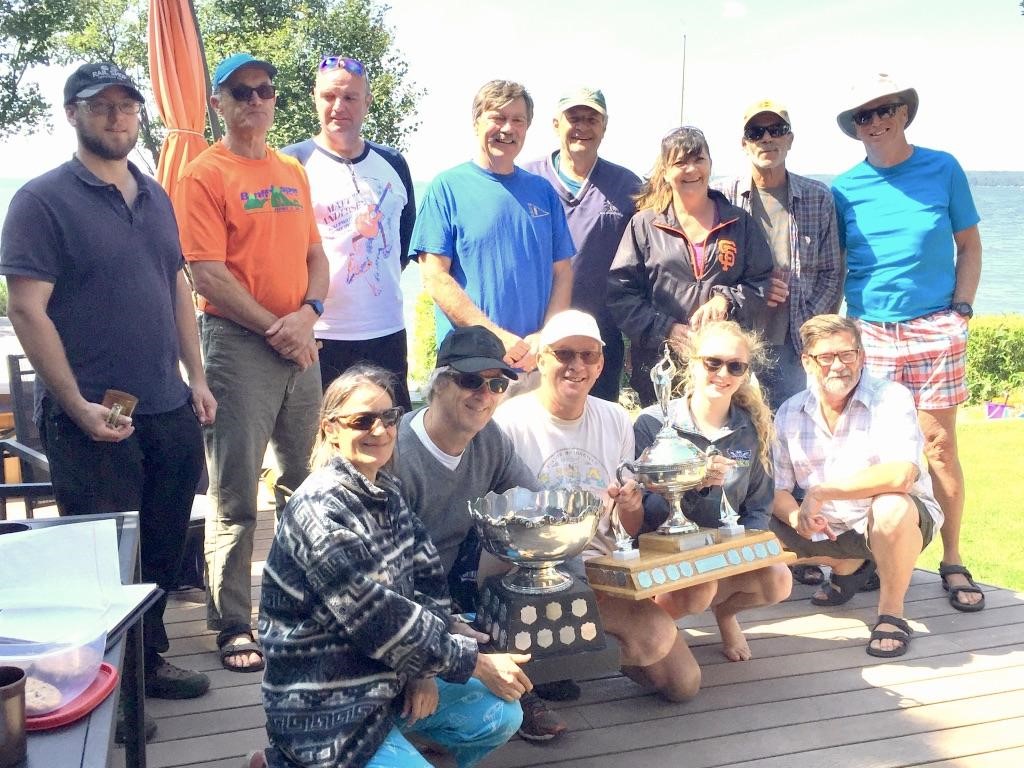 The 2019 Western Y Flyer Championship was held from August 3 to August 4 at Itaksa Yacht Club. Thank you to Richard Quinlan for his recap of the regatta!

Congratulations to Itaska Yacht Club’s brother and sister team of Brian and Barbara Johnston. They are the new Western Y Flyer Champions! Barb and Brian schooled us with consistent sailing including two 1st place finishes. 2018 Champion father/daughter team of Bob and Kristen Mitchell were close behind in 2nd. Richard Quinlan and Ron Hammerstedt limped into 3rd after an untimely capsize, with Paul Johnston and Theresa Oram in 4th and David Mitchell and Bryan Kickham placing 5th. Murray Olsen and crew Zac were turned back on their 10 km sail to Itaska Beach due to equipment breakage, and unfortunately missed the regatta. On Saturday, the winds were rising towards 20 knots when a series of thunderheads caused abandonment of sailing after completing one race. Three races were held Sunday under a blue Alberta sky with perfect 15 knot winds. Racing was very technical and boats always close with frequent juggling of positions on the triangle/sausage course. Thanks to Itaska Yacht Club for hosting the event, the Reynold/Ellis/Agnew family for race management, Johnston’s for the Saturday evening BBQ, the Haley/Sperling family for accommodating visiting sailors, David Alton and Janet Sperling for assisting in the lead up to the regatta, Dale Millar for donation of after-event beverages, Sue Ellis for photos, and Dee Kennedy for door prizes.

Thanks again to Richard Quinlan for the event recap!

See something cool going on in the Alberta sailing community recently? Have an idea for a blog post or article? We would love  to hear about it! Drop us a line at office@albertasailing.com